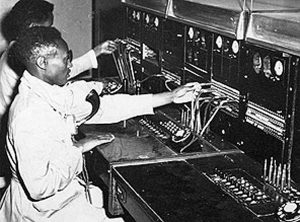 Telecommunications service was introduced in Ethiopia by Emperor Menelik II in 1894 when the construction of the telephone line from Harar to the capital city, Addis Ababa, was commenced. Then the interurban network was continued to expand satisfactorily in all other directions from the capital. Many important centers in the Empire were interconnected by lines, thus facilitating long distance communication with the assistants or operators at intermediate stations frequently acting as verbal human repeaters between the distant calling parties.

Under the Federal Democratic Republic of Ethiopia

As a continuation of the 2005/06-2009/10 five-year plan and after concentrating its efforts on education, health and agriculture, the Ethiopian government has decided to focus on the improvement of telecommunication services, considering them as a key lever in the development of Ethiopia, ethio telecom is born, on Monday 29th November 2010, from this ambition of supporting the steady growth of our country, within the Growth Transformation Plan (GTP), with ambitious objectives for 2015.

After the independence from the Italian occupation, the re-established Ministry of PT and T took over the running of Telephone, Telegraph and Radio communications. It, therefore, rehabilitated the network of the whole country.

Under the Imperial Regime

The Imperial Board of Telecommunications of Ethiopia (IBTE) was established by the proclamation No. 131 on October 15, 1952

The main purpose of the Board, as stated in its establishment charter of article 5 was
“to rehabilitate, extend, repair and maintain the telecommunication facilities of Ethiopia and to engage in the business of telecommunication for profit.”

In 1960, IBTE looked after the operational matters of central Ethiopia, and a dedicated regional office was created in Addis Ababa. At the same time, a radio division was created separately from the preceding Technical Division, bringing the number of division offices to seven.

Under the Dergue Regime

Under the Dergue regime, the Ethiopian telecommunications was renamed as follows:

At this period, the telecommunication services had made a major change of technology ranging from Automatic to Digital technology.

In that particular period,  Ethio telecom had been renamed and restructured through different stages.